Singing On My Joy Stone

In 2010 I had the great joy and wonder of teaching the 5-string kantele to thirty students that ranged in age from 5 years old to 81 in the town of Cokato, Minnesota. I came to them as a recipient of a grant written together with the New Bohemian Arts Cooperative and funded by the Minnesota State Arts Board from the Minnesota Arts and Cultural Heritage Fund. As a performer of ethnic music for many years I have had numerous opportunities to share the music of Finland and to teach the kantele, but never for an extended period of time. It had always been a dream of mine to find a teaching experience where I could join a Finnish-American community for more than a weekend and make some music together.

The city of Cokato, Minnesota is a small community of just under 3000. Its primary influx of immigrants came from Finland and Sweden. And it is one of the oldest Finnish immigrant communities in the state. The first Finnish settlers arrived in 1865. Today twenty-five percent of Cokato’s population is of Finnish descent and it is still regarded as a Finnish community.

In September I arrived in Cokato with 15 kanteles made by Gerry Henkel for the Cokato Finnish-American Historical Society to keep as an instrument lending library. Classes began that month and ran though May. We played inside the city hall, the town library, the local museum, the township hall and the old school house. And our final concert was held at the Dassel Historical Society.

In the Kalevala, Finland’s folk epic poem, there is a time when Väinämöinen who is the great sage, great singer of songs sits down on a singing stone with his 5-string kantele for the first time and plays. The music is beautiful, mysterious, haunting and full of joy.

Listening to my students play Kalevala melodies and Christmas carols and advance to more complex tunes as well as creating new melodies was also mysterious and full of joy. Music has that quality of wonder about it that evades description. I was grateful to discover that my students also wanted to share that wonder and played their new musicfor family, friends, church gatherings and holidays.

It was a pure pleasure being able to share the strange beauty of the kantele with my students. They in turn delivered back to me all the mystery and delicacy of its song that drew me to this instrument so long ago. Our many and different choirs of strings rang inside our bones and lifted up as only music can when played with others.

When you are learning something, anything new—there is that kind of fear mixed with hope, shyness with exhilaration—it is a kind of journeywork, a kind of pilgrimage.

I watched as my adult students came to class eager to play, to offer humor, ideas, innovation and whole-hearted curiosity. One student built this own 5-string and is soon to build another. The same student said he could not make the final concert—perhaps thinking he was not ready or a bit shy—but he came and played two solos for an audience of over two hundred people. Several of these students had no musical background, but seem to find a new connection with the sheer power of making song.

My vision as a musician has always been to be a tradition bearer of my ancestry and to always seek curious wonder and joy.
I never was able to get to all the students signed up on the waiting list. We ran out of instruments. But those generous people of Cokato who did join me throughout the year, helped us share a common thread of ancestry and made music ring inside all of us. It was delightful, humorous, haunting–and enchanted. And I thank them for the opportunity. 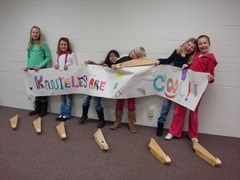